>Welcome Vivi Andrews as the Kick-Off author to this month-long give-a-way.  Yeah, you could also probably read that as kick-ass. 🙂

Vivi and I both finalled in the 2009 RWA Golden Heart and are currently active members of The Ruby Slippered Sisterhood — a group of 2009 GH finalists.  But Vivi went on to WIN the Golden Heart Award for Best Single Title Contemporary Romance that year.

I have never met Vivi in person, but have chatted with her via blog, email and Twitter, and find her both charming and hilarious. 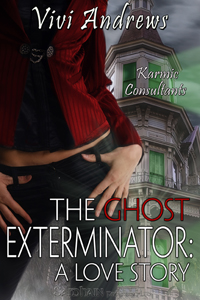 Up for win today:
Her latest release in the Karmic Consultants Novels THE GHOST EXTERMINATOR.  (Or any of Vivi’s other books available in e-book format at Amazon)

Book Summary:
Jo Banks has been seeing ghosts since she was six, so normal was never really an option. Embracing the weird and shunning normalcy makes her the top Ghost Exterminator in her region. Then she meets Wyatt Haines, the uptight, materialistic and irritatingly sexy owner of a successful resort chain.

Wyatt’s new Victorian inn is extremely haunted and the Commando Barbie Ghost Exterminator is just the girl for the job. Except Wyatt doesn’t believe in ghosts, or Jo, or anything outside the norm. He’ll have to start believing fast, though, because Jo’s extermination goes awry and accidentally throws two prankster ghosts into Wyatt’s body to haunt him.

Vivi’s Works In Progress:
THE SEXORCIST – which was just nominated for the CAPA for best paranormal romance – is the sequel to THE GHOST EXTERMINATOR and follows a study exorcist and a cockeyed-optimist wedding planner as they try to save a wedding which is being plagued by a mischief demon.

SERENGETI SUNRISE, the last of her Serengeti Shifter novellas, releases as an e-book in May and features a pair of commitment phobic lion-shifters who might be perfect for one another if they could both just stop trying to prove to everyone how independent and self-reliant they are.

For more works in progress as well as free online reads visit her WEBSITE.