>Addison Fox is … you guessed it … another Twitter buddy. We have never met in person, but I have enjoyed her camaraderie on-line.

When I saw WARRIOR ASCENDED in the bookstore and popped the book open to somewhere about the first third and started reading (my typical habit with an author new to me), I was immediately taken my the cadence of her voice.  Then I read the jacket copy and I was hooked.  Then I found out that WARRIOR AVENGED is the first of her series and I had to buy it…because I never read out of order. 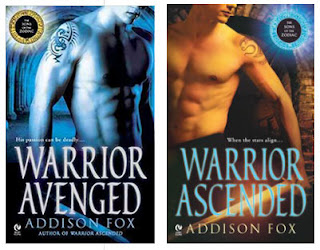 Book Summary:
Warrior Avenged
Book 2: The Sons of the Zodiac

For ages, the goddess Nemesis has sought divine vengeance against mortal man, as she awaits her chance for retaliation against Mount Olympus. Now, after making a deal with a dark wizard, she has reinvented herself as a female spy with her own sinister agenda…

Immortal warrior Kane Montague is as lethal as a Scorpion – like the one that marks his powerful form. As an assassin for MI-6, he was an ace gun-for-hire until someone very close burned him. Now on the outs with his former colleagues, Kane knows all too well who’s to blame: a sexy secret agent named Ilsa.

When their paths cross again, the passion between Kane and Ilsa is irresistible…and possibly lethal. But they soon realize that Ilsa is simply a pawn in a conspiracy aimed at the heart of the Zodiac Warriors. Can Kane trust her? Or is Ilsa the only one who can save him, body and soul?

Warrior Ascended: Book 1: The Sons of the Zodiac
Millennia ago, the Goddess of Justice created a race of fierce Warriors, each imbued with a special power of the Zodiac, charged with protecting humanity from the darkest of evils.

Charming, proud, and impulsive, Leo Warrior Brody Talbot is fighting what may be his final battle. Enyo, the Goddess of War, plans to fulfill an ancient prophecy to destroy humanity by harnessing the dark power of the Summoning Stones of Egyptâ€”and thereâ€™s only one person who knows enough about the stones to help Brody diminish their strength.

Since her father’s murder, museum curator Ava Harrison has continued his research of Egypt’s ancient treasures. She’s just landed the exhibit of a century, displaying the Summoning Stones at New York’s Natural History Museum. Used to working alone, Ava is suspicious of the arrogant archeologist who’s been brought in to ensure the stones safekeeping–but his presence ignites an unexpected blaze of attraction.

Never in all his centuries has Brody met a woman who enthralls him like Ava. But, bound to protect her, he struggles to deny his passion as they are drawn into a dark and dangerous final reckoning between good and evil.

“I’m really excited to be writing the dark, sexy paranormals and fun, hot contemporaries. There will be another Zodiac book in 2012 along with another Alaska title as well (all titles are still TBD).”
~Addison Fox