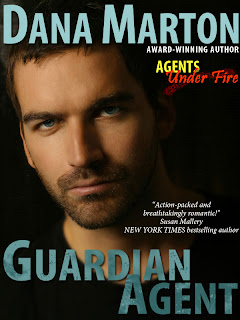 Many of you may have run across my guest today.  Dana Marton is not only a multi-published author (27 books now!), but she also runs www.prizesforreaders.com!  A girl after my own heart!!

Today, Dana offers an excerpt of her June release, GUARDIAN AGENT.
And she’s GIVING AWAY an ecopy of the full book as well!!
Just comment to enter! (Open Internationally)

Dark waters lapped the century-old palace’s foundation, eager to claim the forgotten building on one of Venice’s backstreet canals. At four on the February morning, tourists still partied on in the distance, drunk on love, youth and full-bodied Italian wine. Gabe Cannon could hear both the water and the faint beat of the music, but he couldn’t hear the half dozen men in the building with him. His new commando team spread out like ghosts moving through the night.

“Target on the roof,” the team leader’s voice whispered in his earpiece.

He stole up the crumbling stairs, ready for the rogue soldier who needed to be brought in before he caused more damage. He’d known Jake Tekla ten years ago in the army–a decent guy back then, but war could change a person, could even twist a man’s mind.

Static hissed in his earpiece before the words, “Kill order authorized. Repeat, authorized to shoot on sight.”

His instincts prickled. Standard procedure called for an attempt to capture first, and see what information they could gain during interrogation. Usable intelligence trumped a quick kill, every time. Then again, he worked for a private security firm now: XO-ST. Xtreme Ops Shadow Teams. They did things differently than his previous employers, the army and the FBI.

Gabe reached the roof. Plywood patches formed a psychedelic pattern in the moonlight—an unexpected break. Not having to sneak around on crumbling Mediterranean roof tiles would make this much easier. He stole forward and eased into the cover of a crooked chimney stack.

He caught a silent shadow at the door he’d come through–Troy, one of his teammates, joining him. Odd how Gabe had been last into the building, but first on the roof. Maybe the others had pulled back on purpose, testing the new guy. Another person might have been annoyed, but he’d expected this much. He wasn’t afraid of having to earn his stripes.

Dormers, chimneys and ridges blocked visibility. Clouds kept drifting over the moon. Scan. Move forward.Take cover. A night game of hide and seek in a labyrinth, with a fair chance that the ramshackle roof could open up under his feet any minute.

Then he stole around a dormer and spotted the target at last. Jake Tekla blended into the night in black fatigues, similar to Gabe’s, black ski mask in place. A lot slighter than Gabe remembered. Looked like being on the run had taken its toll on him. The man crept toward the edge of the roof, his focus on the jump he was considering.

Yet another thing that didn’t add up. Not for a government-trained, seasoned soldier.

Gabe inched closer, watching for a trap. He flicked the safety off his gun. Come on. Turn. He moved another step closer then stopped with his feet apart, gun raised, silencer in place.

His target sensed him at last and spun around.

Gabe caught the curve of a breast in the moonlight, and his finger froze on the trigger as he stared at the woman.

She could be a trap–Tekla’s accomplice or a decoy.

He had a kill order.

Most of the men he worked with squeezed the trigger each and every time, preferring to err on the safe side. He’d been like that once. A muscle jumped in his cheek. He pushed the North Village incident from his mind.

The woman stared at him for a startled moment, then her instincts kicked in and she ran. Or tried. He lunged after her, caught up in three leaps and brought her down hard. She was lean, yet soft, every inch unmistakably feminine. But none of that feminine softness showed in her fighting spirit. She shoved against him with all she had. She had to know she was conquered, yet she refused to yield, stirring some of his base instincts.

“Stop,” he hissed the single word into her ear as he did his best to subdue her.

Plywood gave an ominous creak on the other side of the ridge, the team moving into position to cover the roof and inspect all its nooks and crannies. Something stopped Gabe from calling out even as the woman did her best to scratch his eyes out, fighting in silence. Enough small things about this op had triggered alarms in his mind for him to want to see what he had here before he called the rest of the team in.

He patted her down one-handed, although if she had a knife she would have probably used it on him by now. He kept his voice low. “Did Tekla send you?”

She tried to buck him off. He managed to hold her down with one hand and ripped her black mask off with the other. Wavy dark hair tumbled free, eyes going wide with panic even as her full lips snarled. Despite the semidarkness, he couldn’t miss her beauty, or the fact that she had Tekla’s eyes and nose.
“Who are you?” he asked, even as the answer was already forming in his mind.

The man had two sisters, the younger one a teenager and the other somewhat older. The one under Gabe now was all woman and then some. Definitely not the teenage sister. He’d met both once at the airport when Tekla and he had gone home on a short leave over Christmas, back in their army days. They didn’t have parents, he remembered suddenly. Tekla had enlisted so he could support what was left of his family.

What in hell was his sister doing on the roof? No way his team’s intel could be so bad on an op like this. They weren’t fighting in the chaos of some distant battle field. The target’s sisters were supposed to be living with a distant aunt in Arkansas, according to the op files.

His mind ran all the options as he pressed her down a little harder to keep her still. He wanted to believe that Brent Foley, the team leader, hadn’t known who she was when he’d given the kill order, but being naïve didn’t pay in this business.

But if Brent did know… Eliminating one of Tekla’s sisters might push the guy over the edge, bring him out into the open as he came in for revenge. XO-ST’s small army for hire consisted of ex-soldiers and ex-agents, conducting outsourced ops for the U.S. government and anyone else who could meet their price. Brent wrote the book on how to reach goals by whatever means necessary.

Except, Gabe hadn’t signed on to kill innocent women, no matter how badly he needed the money. He motioned to her to stay down and stay quiet, then eased his body off her a little so she could breathe.

“Is he here?” he whispered.

After another spirited minute of resistance, her muscles went slack and she lay there, breathing hard, despair filling her eyes. She shook her head.

He pulled up all the way. Her gaze slid to his gun, and she swallowed, her body stiffening. Fear came onto her face, that wide-eyed look of people who know they are about to die. She didn’t beg, nor did she offer her brother’s life for her own. She simply met Gabe’s gaze and lifted her chin.

She still looked impossibly young, although he figured she had to be around twenty-six or twenty-seven by now. Her slim body might have looked fragile next to his, but her eyes shone with defiance. Which wouldn’t be enough, not with a kill order in place and a team of mercenaries spread out around them.

“I’ll come back.” He secured her with a plastic cuff to the iron scroll that decorated the roof’s edge, with one smooth move.

He switched on his mouthpiece as he turned from her, ignoring her silent struggle. “Target escaped the roof. East end.”

He ran along the edge toward the other side where a six-foot gap separated the old palace from the next building. Dark shapes materialized from the shadows. He jumped without giving the steep drop below him much thought. As expected, his clear purpose and energy drew the rest of the team behind him.

He dashed forward as if he could see a man’s disappearing back somewhere up ahead. He didn’t slow for twenty minutes and several rooftops later. Then he braced against the edge of the roof as he stared down onto a dark, abandoned bridge below him. “Lost visual contact.”

A four-letter word came through his headset, then, “Did he look hurt?”

“I could have sworn I clipped him before we lost him last week.” A moment of silence. “Spread out.”
As the team scattered, Gabe made his way back to the old palace, trying to think of the woman’s name, not expecting much after ten years, surprised when it did pop into his brain: Jasmine.

She was going to take him to Tekla. He would bring the man in himself, making sure she didn’t get hurt in the process. Things could get out of hand when a cornered person was confronted with an entire commando team. For all he knew, the other sister was here, too. His jaw muscles tightened. He had no respect for a man who would use his sisters as a shield. Gabe vaulted from roof to roof, watching out for crumbling edges.

If he could complete the mission without bloodshed, he wanted to give it a try. Maybe saving a few lives, after having taken so many, would even the scales a little.

Except, he found the palace roof empty. 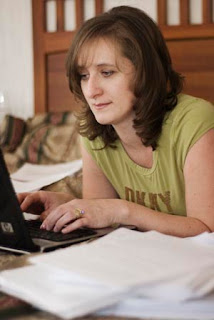 Dana Marton writes fast-paced action-adventure romances that take her readers all over the globe. She is a Rita Award finalist and the winner of the Daphne du Maurier Award of Excellence. She loves writing stories of intrigue, filled with dangerous plots that try her tough-as-nails heroes and the special women they fall in love with. Her books have been published in seven languages in eleven countries around the world.

She would love to hear from her readers.

Okay, the above version is the glamour version for press releases. The truth is that my path to publication was nothing but unglamorous. I wrote for 13 years and completed 4 books (as well as having others in various stages of completion) before I finally received a call from a Harlequin editor. I was beginning to wonder if I was being tenacious or just too dense to know when to quit. But it all worked out at the end! J I love, love, love writing and would spend all day in front of the computer if I could just break my family of the habit of wanting to eat and wear clean clothes. What’s up with that? But I must get up from the desk now and then, if only because my Internet connection goes down or my ancient PC overheats. Then I do enjoy cooking, knitting, hunting for treasures at the flea market, our Beagle, Peanut the Destroyer, and gardening.

I’d love it if you picked up one of my books and emailed me to tell me what you thought of it. I’ve been known to name characters after readers. Just ask Princess Judi.