>My guest today, Sherry Isaac is an amazing writer and an even better friend. Her first collection of shorts, STORYTELLER, debuted last month, July 2011.

She will be giving away one copy of her book and 5 custom made bookmarks. Post a comment or ask a question to enter! 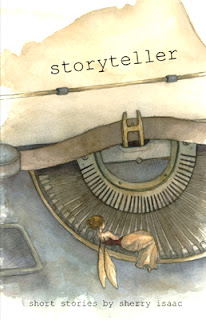 Write what you know.
That’s the advice we’re given when we start to write, but what does it mean? Does it mean that, because I don’t know a Phillips from a Robertson, a mallet from a hammer, a G-clamp from an A-frame, my hero can’t be a carpenter?
If it does, then it’s re-write time again.
True, author John Grisham (A Time To Kill, The Chamber) uses his knowledge and experience as a lawyer to write his legal thrillers. But did Anne Rice actually interview a vampire?
Or did she draw on her knowledge of New Orleans and the gothic impressions of the ornately decorated churches of her childhood, and fill in the rest with imagination?
Don’t know about you and Stephenie Meyer, but I’m going with the latter.
When looking for a starting point in a story, nuggets of truth are a great place to find inspiration. It is imagination that dictates where the story will go, and how it will end.
My maternal grandparents, Isaac and Katie, are gone, but a year or so before my grandfather, who went first, passed, I heard a story. A story of how they met.
Isaac and Katie both fled Russia in the days following the revolution. Isaac ended up in Winnipeg, Katie in Ste. Anne, a small farming community southeast of the city.
Isaac, educated and wealthy in his homeland, retired a machinist. I don’t know where he worked or what he did in the twenties, but suspect it was factory-oriented. As the story went, Isaac and his cousin knew where to go to meet girls.
And on what day. 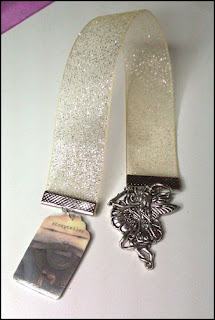 Like many girls her age at the time, Katie worked as a domestic in the city, and Wednesday was the standard day off. Woolworth’s on Portage Avenue, in the heart of downtown Winnipeg, was the place to meet their girlfriends and ‘spend their earnings on ox-blood lipstick and the new flesh-colored stockings that were al the rage’.
There are a lot of blanks in the story. Who caught whose eye, who said what, and how a chance meeting turned into a life-long love is a mystery. In the end, a fact: In a city park, under the shade of a tree, my grandparents shared their first afternoon together.
A scandalous afternoon spent… Kissing!!!
Grandpa, you sly dog.
What I knew for sure when I started to write seriously was that someday I would write a piece honoring Isaac and Katie’s lifetime devotion.
Isaac had a steadfast rule: Never ask a girl out more than twice. A third date meant you were serious.
Bit of a player, perhaps?
After that afternoon with Katie, he confided in his cousin: “Let’s just say there’ll be a third date.”
What I knew for sure when I heard that detail was that someday, somehow, in some story, I would have to use that line!
Years later, the two things I knew for sure came together, and I wrote what I knew, filling in the blanks with imagination, dicing it up with a little research to get the details right.
Imagination fuels the give and take of dialogue, gestures, the dance of body language: ‘She turned to the inside leaf of the dust-jacket; her hazel eyes darted across the lines. Simon slid three book lengths closer and pointed to the open page. “That looks interesting. What’s it called?”’
Imagination sorts through the fashion of the day: ‘There were morning girls, too anxious and eager to please, in their flapper dresses, all pearls and feathers, bare arms and knee caps… The shapeless lunch-hour girls disguised their curves in boyish clothing, with hairstyles to match and hats that hid their eyes…’ and settles on the heroine’s look: ‘Her flowing floral print dress fell to mid-calf, slender ankles tapered into low-heeled Mary Janes. Her fair hair caught the light, rippled finger-waves that skimmed her fine jaw’.
Imagination devises a pant leg caught in a bicycle chain, the clank of metal on a wooden sidewalk, and Simon’s reaction,“Bloody hell!”, to shape setting and character.
Imagination is a twist, a tango, a Texas two-step. Writer and reader, the partners. A cluster of clues fill the reader’s mind and soon the scene takes shape. When the young man in wide-cuffed trousers who dreams of owning a Ford Model-T suggests a date, “Why don’t I treat you to a soda?”, the reader supplies the malts, the floats, the egg salad sandwiches.
A Love of Reading is not memoir. Outside of their initial meeting and their life-long marriage, the heroine and hero, Lila and Simon, bear little resemblance to my grandparents.
The end result ‘reveals,’ in the words of author and reviewer Tanaz Bhathena, ‘nuances of a love that is all at once innocent, mysterious and timeless’.
I like to think my grandparents are proud.
~~~
A LOVE OF READING
Short Story Excerpt
Sherry Isaac
“Simon, it’s your turn. I can’t read anymore! My voice is getting hoarse.”
The spring sun was warm so they’d sought the shade of a large weeping willow. Simon lay in the cool grass, his legs crossed at the ankles, his hands behind his head. He’d been wrong, ole Roger Ackroyd held out for several chapters. Simon removed the long blade of grass from between his teeth. “But I love the sound of your voice, Lila. Even when you speak of poison and suicide, it’s like an angel sighing.”
Lila sat on Simon’s jacket so she wouldn’t stain her skirt. She tapped the toes of his boots with the book. “Oh, stop!”
Simon rose to his knees and tossed the book aside. “If you’re tired of reading, I know something else we could do.” He crawled toward her until his face was inches from hers.
She lowered her long lashes. “What would that be?” Her rosebud lips barely moved. Her breath was warm, sweet.
He leaned closer, his lips a mere breath away from hers. “This.”
Simon rode his bicycle to work the next day without incident. The journey seemed to last only seconds as he pedaled the last stretch down McPhillips Street. He entered the gate and saw Jacob leaning against the fence, waiting for him.
“Where’d you get to yesterday?”
Simon dismounted and parked his bike. “Nowhere.” He lowered the brim of his hat, chin tucked under to hide his broad grin as he walked toward the plant entrance.
Jacob was ahead of him, walking backwards so they could face each other. “You met her, didn’t you? You finally met her!”
Simon bit his lip to erase his grin before answering. He stroked his chin, eyes downcast, as if considering a complicated mathematical formula. Numbers and symbols danced in his head, the language that didn’t exclude him. The tactic worked. He could meet his cousin’s eyes with an aloof expression. “I might have.”
Jacob pulled off his cap, waved it in the air and let out a whoop. “I knew it! About time, too. What’s her name?”
The smile would not stay hidden. It spread across Simon’s face and made his cheeks cramp. “Lila.”
“Lila? Mm. Even I could fall for a dame with a name like that. What’s she like?”
Simon stopped and pressed his lips together. “You know I don’t kiss and tell.”
“She let you kiss her? In Woolworth’s? You’re smoother than Rudolph Valentino! So what now?” Jacob landed a playful jab on his cousin’s shoulder. “You gonna gently remove the hook and let her go?”
“Let’s just say there’ll be a third date.”
~~~ 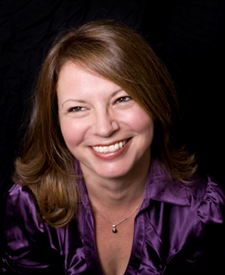 Winner of The Alice Munro Short Story Award, Sherry Isaac’s tales of life, love and forgiveness that transcend all things, including the grave, appear online and in print. Her first collection of shorts, Storyteller, debuts July 2011. For more information, or to order an autographed copy, click HERE.

Enter to WIN a copy of Sherry’s book or 1 of 5 custom bookmarks by posting a comment or ask a question!