>I met Trish years ago when we critiqued for each other. I’m so very thrilled to have her here today as a guest, talking about her new release, FORGED IN FIRE. Zane is just as yummy as an alpha can get and Trish’s writing is as deep as her characters and as visceral as the twists in her plots.  And, boy, oh boy, do I love what I see she’s done with good ole Zane!!

Leave a comment to be entered for a chance at:
1) An ecopy of FORGED BY FIRE
2) 1 of 5 custom handmade bookmarks
International! 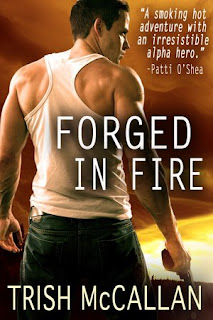 Beth Brown doesn’t believe in premonitions until she dreams a sexy stranger is gunned down during the brutal hijacking of a commercial airliner. When events in her dream start coming true, she heads to the flight’s departure gate. To her shock, she recognizes the man she’d watched die the night before.

Lieutenant Commander Zane Winters comes from a bloodline of elite warriors with psychic abilities. When Zane and two of his platoon buddies arrive at Sea-Tac Airport, he has a vision of his teammates’ corpses. Then she arrives—a leggy blonde who sets off a different kind of alarm.

As Beth teams up with Zane, they discover the hijacking is the first step in a secret cartel’s deadly global agenda and that key personnel within the FBI are compromised. To survive the forces mobilizing against them, Beth will need to open herself to a psychic connection with the sexy SEAL who claims to be her soul mate.

The Protector by Trish McCallan

Hands down, my favorite romantic hero is the protector. I like them alpha too, dripping with testosterone. It doesn’t matter what the sub-genre is, as long as the book has a sexy, alpha protector for a hero.

Pretty much every sub-genre has this type of hero, although they are most common in romantic suspense, or romantic thrillers. In this sub-genre the hero is a usually in law enforcement, or perhaps a spy, sometimes a military man. They serve their city, or county or country and protect an unsuspecting and somewhat naïve population from everything from rapists to terrorists. Many of these heroes are gruff, often damaged by what they’ve seen during their forays into the seamier side of life. Or they can be tortured by past horrors, and past betrayals. Almost all of them are highly sexual, as though that alpha protectiveness goes hand in hand with a ramped up sex drive—which is no surprise really, when you consider all that testosterone. *BG*

The protector archetype thrives in romantic suspense and some of my favorite romantic suspense heroes fall within this archetype. Linda Howard excels at writing this kind of a hero. And I count several of her novels among my favorites. To Kill and Tell, Mackenzie’s Pleasure, Dream Man, Burn—these are all on my keeper shelf. And then we have Suzanne Brockmann’s Troubleshooter Series, sexy SEALs out to save the world. Maya Banks’ KGI Series and Stephanie Tyler’s Shadow Force Series both fall within the umbrella as well.

But the protector is just as popular in dark paranormal romance. In JR Ward’s Black Dagger Brotherhood, the entire reason behind the formation of the brotherhood was to produce a sub-species of vampire warriors capable of protecting their race from an ancient enemy determined to eradicate them. In Lara Adrian’s Midnight Breed Series, The Order formed to protect humans and vampires alike against their own kind who had been lost to blood lust. Elisabeth Naughton’s Eternal Guardians straddle and protect two worlds, both of which would face obliteration without them.

It’s no surprise, I suppose, that when I started writing my own heroes fell beneath this umbrella. In previous books my heroes have been homicide detective, but in my new series—The Forged Series—they are Navy SEALs.

Cool, controlled, deadly—the heroes of Forged in Fire are seasoned warriors who face death with without hesitation or blinking an eye. They do it because they are protectors. Each and everyone one of them. They’d give their life to protect this country and the citizens who inhabit it.

So what heroes do you have on your keeper shelf that would fall beneath this umbrella? Enquiring minds want to know, and my TBR shelf is looking for a couple of new series!

I’m including a short excerpt here of my protectors in action. I hope you enjoy!

“Let’s hope that woman of yours shows up ASAP. Much more of this drought and you won’t remember what to do with her.” With a flash of white teeth, Rawls reached over to punch Zane’s shoulder.

The moment Rawls’ fist made contact, every muscle in Zane’s body clenched. He froze, his breath locked in his throat. His vision blurred.

It was a subtle sound. A switch flipping inside his head. An image flashed through his mind. Quick. Brutal. Ugly.

Rawls sprawled across a bank of narrow seats. His blue t-shirt splotched with black. Blood dripping from limp fingers. A fixed stare glazing his blue eyes. 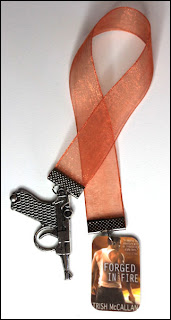 “Son of a bitch.” Sheer disgust vibrated in Cosky’s gritty voice. “We’re on stand-down. This is a civilian flight. Regardless of that all-too-familiar look on your face, we cannot be in any goddamn danger.”

But he didn’t dislodge the hand Zane clamped around his bicep.

This time Zane was expecting the vision. He tensed anyway, his body contracting into one giant charley horse.

He strained to capture as many details as possible as the new vision flashed through his mind.

Gray eyes locked and empty, already filming with the unmistakable haze of death. Black hair saturated with blood. Hands clenched. He was splayed across a narrow aisle, dark blue upholstered seats rising on either side of his head.

When the image vanished, he released Cosky’s arm and wrestled air back into his lungs.

“Tell me this is a joke,” Cosky demanded.

Zane shook his head and gripped the back of his neck with both hands.

“What did you see?” Rawls finally asked.

“From boredom?” Cosky asked dryly, one black-as-sin eyebrow arching. “We are going to a wedding.” A quick glance at Zane’s face, and a glint of steel darkened his gray eyes. “Where’s this going down?”

“On the bird.” Zane frowned. “Couldn’t tell whether she was in flight. Didn’t get a good enough look.”

Cosky turned to study the boisterous crowd. “When do you ever?”

“Which bird? Over or back?” Cosky braced his hands on his hips and studied Zane’s face. “Either fits the three-day window for those flashes of yours.”

Cosky grunted. “I don’t suppose you saw who killed us?”

“When have these damn things ever been that accommodating?”

“Fuck.” With a disgusted shake of his head, Cosky dropped his chin and scowled at the worn carpet. “What about the wounds?”

“A crash?” Rawls broke in quietly.

“Doubtful. Neither of you were burned. We’re looking at some kind of weapon.”

Cosky frowned. “It would be easier to smuggle a blade through security, but few people are good enough to take us on with a knife. Chances are it’s a gun.”

Zane pushed away from the wall. “Whatever’s going to happen is bad enough to take the three of us out.” The flashes never centered on him, but if Cosky and Rawls were in danger, he was as well. “We need to get hold of Mac.”

As the OIC of SEAL Team 7, Commander Jace Mackenzie had the pull to get the plane grounded and the passengers searched.

“Question.” Cosky’s attention zeroed in on Zane’s face. “What are we going to tell him? We don’t know what’s going to happen, who’s behind it, or what kind of weapons will be used. If Mac gets this bird grounded, only to have nothing show during the search, the backlash is gonna be a bitch.”

“What are you suggesting?” Zane cocked an eyebrow. “That we skip the wedding, keep our mouths shut and let events play out?”

“Don’t be an ass. I’m saying it would be handy to have some solid intel to pass on for a change.”

FORGED BY FIRE is available at Amazon, Barnes & Noble, and Smashwords.

What’s your favorite type of hero?
Leave a comment to be entered for a chance at:
1) An ecopy of FORGED BY FIRE
2) 1 of 5 custom handmade bookmarks
International!