SPANKALICIOUS RELEASE DAY ELISABETH!!
Today is release day for the third book in Elisabeth’s ETERNAL GUARDIAN series, TEMPTED.  To celebrate, she’s provided a nice sneak peek excerpt and we’re giving away 1 copy each of the first two books in the series plus matching bookmarks.  Leave a comment to enter! 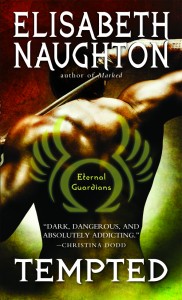 
As daemons ravage the human realm and his loyalty to the Guardians is put to the ultimate test, Demetrius realizes that Isadora is stronger than anyone thought. And finally letting her into his heart may be the only way to save them both.

His gaze intensified, and warmth reignited all over her skin under that heated stare. “Rescuing you is turning into a full-time job.”

It was. Four times he’d saved her life recently. Four times he could easily have let her die and never looked back. But he hadn’t. He’d been right there to drag her to safety each and every time. And he hadn’t asked for a single thing in return.

Her heartbeat kicked up hard in her chest, beat against her ribs with a rhythm that fanned warmth to her breasts and slid lower. She thought back to the snippy comments she’d tossed at him yesterday, to the way she’d treated him most of her life. Emotions pinched her chest, closed her throat, made it hard to breathe.

He nodded toward the table before she could think of a single thing to say. “Those are some clothes I found in the crates on the beach. Thought you might want them. The shirt you were wearing…well, let’s just say it didn’t make it.”

She looked down at the blanket wrapped around her and realized he’d seen her naked. Again. Heat rushed to her cheeks. But for some reason, knowing he’d stripped her bare didn’t disturb her, it electrified her.

Slowly, because she knew he was watching her, she moved up the steps to the stone table, ran her hand over the pair of denim shorts and the orange tank top folded neatly on top. “These weren’t in the bundle you brought up this morning. You went back?”

“We needed water. I had to go back out anyway. Didn’t think you’d want to walk around this place naked with me here.”

Her gaze shifted back to him. And in that instant she saw every one of her perceptions where he was concerned shatter like glass against the floor. This was not the stone-cold bastard she’d always believed him to be. This was an ándras—no, a hero—of honor.

Emotions that came out of nowhere and everywhere all at the same time pushed her feet forward. “You saved me,” she whispered. “You could have let me die.”

“Why would you want me to live?” she asked, turning his question back around as she closed the distance between them and moved down two steps.

He didn’t step back or look away, but the wrinkle in his forehead said he wasn’t sure what she was implying and didn’t know how to react. “It’s my job to protect you.”

“Probably, but…you risked your life for me. Not once, but four times.”

It wasn’t a question, but a statement. As if it were a fact every other day of his life. And in the silence that followed she knew he was thinking the same thing as she. That something was changing right here between them. And if one of them didn’t put a stop to it, their relationship would never be the same again.

“You rescued me,” she said softly.

His black-as-night gaze roamed her face, but he didn’t answer. And he didn’t touch her, though deep inside, she felt he wanted to. He just didn’t know how to bridge the gap.

“Maybe,” she said softly, hoping to bridge it herself, just a touch, “maybe one day I can return the favor.”

“You can’t save me,” he whispered.

“Because some things aren’t worth the effort.”