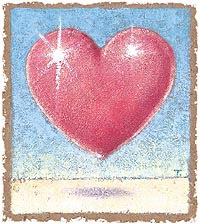 I get to relive it all over again vicariously through my daughter. At fourteen, she’s prettier than I’ve ever been, and smarter, sassier, more confident, more athletic more savvy than I was even at twenty. She’s also a really great kid.

Sure, we’ve had some rough spots, but we’ve come a long way and found a comfortable place together–for now. I know it will change. Everything changes. So, I’m enjoying the innocence of young love while it lasts.

She’s liked one boy in particular for about six months (a long time by teenage standards). I’ve met him, he’s cute (tall, dark and cute), shy, polite. He’s got a few stumbling blocks–divorced parents, each remarried who care more about their new spouses than about him. But, from what I’ve heard through my daughter and my daughters friends (and the parent networking of a small town), he’s a pretty decent kid, too.

He hasn’t admitted to liking her yet. So, we’ll see. She knows she’s not allowed to “date” until she’s sixteen, and even then she’s going to have some strict limits, but of course there’s little I can do about her liking a boy and him liking her back.

Fortunately, she’s incredibly open with me. The minute she gets in the car after school or track practice, she tells me what transpired that day. It’s always something small that makes her glow, makes those dimples pop into her cheeks when she smiles. “He texted me first today.” “He laughed at my joke.” “He ran laps with me at track.” “He gave me that smile, you know the one.”

God, she’s giddy with the infatuation. And I’m telling you, it’s infectious.

Yesterday, she said they fought all day. When I asked what that meant, turned out they were playing all day–tripping each other, pushing each other, stealing backpacks. She thought it was all fun and games, I knew it was an excuse to touch each other.

Today, she comes to the car wearing a sweatshirt I don’t recognize. “Whose is that?” I ask.

She says, “Wait, I’ll show you.” She takes off her backback and turns around. His last name is sprawled across the back.

When she turned back to me, her eyes were sparkling bright, deep dimples in her cheeks, straight, white teeth (where she got any of those, I don’t know) grinning at me. I could feel her excitement. My own chest got tight, my heart beat a little faster, my body felt lighter.

“Where’d you get that?” I asked. “Or, rather, how did you get it and why did you get it?” And what exactly does it mean?…but I didn’t ask that one.

“No. He said I could wear it.” She does a luscious eye roll. “And it smells so good. It smells like him. I’ve been getting high from the smell of it all afternoon.”

I laugh. “He owns you now, girl. He’s got his name plastered across your back.”

As romance writers, we could learn a lot by observing and reliving those first delicious stages of interest, attraction, infatuation and love.

What do you remember (or relive via children) about young love?

5 Responses to Remeber when…