>You may know Elizabeth Craig as Riley Adams, her pseudonym under which she writers her cozy mysteries with a culinary flair.  Or, if you are a regular on Twitter with a penchant for writing-related posts, you may know her as Elizabeth Spann Craig.

That’s how I first discovered Elizabeth.  The plethora of writing articles she tweets on a regular basis boggles the mind.  She says she follows over some 1200+ blogs.  Probably significantly more by now, and shares solid writing-related posts via Twitter.  An invaluable resource to be sure.

There is no way I, or many other writers, would have access to the resources she has made available via her tweets, and I’m very grateful for all the time she spends sharing with the writing community.

Secondly, I read her debut cozy, the first in her Memphis Barbeque series, written as Riley Adams, DELICIOUS AND SUSPICIOUS.  A delight! Entertaining, fun, quirky…and I’m giving a copy away today!

Elizabeth writes the Memphis Barbeque series for Penguin as Riley Adams and the Myrtle Clover series for Midnight Ink (under her own name). As the mother of two, Elizabeth writes on the run as she juggles scout leader duties, referees play dates, drives carpools, and is dragged along as a hostage/chaperone on field trips. (Not to mention her regular blog and tweeting all those great writing links!!) 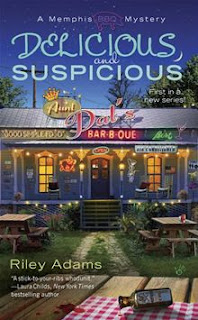 Book Summary:
Welcome to Aunt Pat’s barbeque restaurant–family run and located in the heart of Memphis, Tennessee. Named in honor of Lulu Taylor’s great aunt, the restaurant is known for its ribs and spicy corn bread, but now the Taylor family will be known for murder–unless Lulu can clear their name…

Rebecca Adrian came to Memphis to suss out the best local BBQ for a prominent Cooking Channel show. Trouble is, Rebecca doesn’t live long enough to mention a bad review. A mystery ingredient has killed her–and now all fingers are pointing to Aunt Pat’s restaurant. Horrified that her family is being accused of murder, Lulu fires up her investigative skills to solve the crime before someone else gets skewered…

The third book in the series is set to launch in November, 2011.

Have a great weekend everyone!