>My friendship with Kris Kennedy developed from a combo of Twitter chat and critque partner intro.  Yet another sweetheart of a person as well as a talented writer of sexy romance.

Kris writes medievals, but works to keep them accessible—both in language and tone—to the modern-day reader.

Before you write medievals off as not being ‘your thing,’ read one of Kris’s stories — especially the IRISH.  It could be  exactly what a non-medieval lover would, well…love.

And here’s your chance to give it a try!! 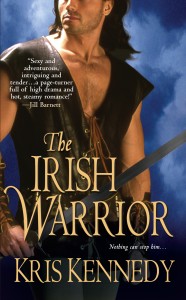 Book Summary:
Inhibited, accountant-minded Senna de Valery comes to Ireland to finalize a deal that will save her faltering wool business. What she gets instead is a cunning English lord with dangerous ulterior motives.

Forced to rely on her wits, not her ledgers, Senna frees an Irish warrior chained in the prisons, and together they flee across the war-torn land of medieval Ireland. But Finian O’Melaghlin is much more than a charming, roguish warrior. He is councilor to his king, on a grave mission to recover military secrets, and has a dangerous agenda of his own.

Set on the eve of Magna Carta, Jamie, one of King John’s chief lieutenants is sent on a mission to bring in an exiled priest who has information that could destroy King John’s throne.  It’s a simple mission, until Jamie comes up against a thief.  Eva, a beautiful, startling woman, not only gets in his way, literally, but upends all his plans. When the rebel barons send an armed mercenary after the priest as well, Jamie and Eva form an explosive alliance, embarking on an adventure that will betray the truth about their identities, reveal their unexpected loyalties, and unleash a passion that could seal their fates forever.

Works In Progress:
Currently, Kris is working on another medieval, as-yet untitled, which will be out in 2012.