>Stephanie Tyler and I are Twitter & Facebook buddies.  I met Stephanie through my CP, Elisabeth Naughton, and got to know her online.  After reading the first book in her romantic suspense trilogy, HARD TO HOLD, I was hooked.

Stephanie writes strong heroines, uber-hunky heroes and tight suspense. Nothing keeps me glued to the pages like that combination. YUM!

Like Larissa Ione, Stephanie was generous enough to take time out of her crazy schedule to read and quote my debut novel, FEVER…but even before it was FEVER.

Stephanie spent her time reading and quoting the book even before I’d sold it.  Even before it was shopped.  My agent was thrilled with the quote and the book sold in a two book deal.  The editor who bought my book recently said in an email, “Our publisher is a big believer that [cover quotes] make a huge difference for a debut…”  Just one of the (less important) reasons I’m so grateful to have Stephanie as a friend!

Today, Stephanie has generously offered FIVE of her books up for giveaway — and the winners get to choose which book they receive: any one of the five books in her romantic suspense trilogies including the three books from her Hard to Hold series: HARD TO HOLD, TO HOT TO HOLD, HOLD ON TIGHT and the two books from her Shadow Forces series: LIE WITH ME or PROMISES IN THE DARK.

How cool is that? 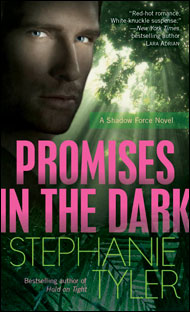 Up For Win Today:
YOUR CHOICE of any one of the five books listed above.

Works In Progress:
Stephanie is currently working on a NEW paranormal romantic suspense trilogy which will be published by NAL.

A very big thanks to all of you who followed the contest this month and entered to win!  Another giganormous thank you to the authors who participated in the giveaway — each one of you holds a special place of gratitude in my heart.

I hope those of you interested in writing and reading will come back and visit often.  I have some great stuff to share in the upcoming months!