We met in person at Elisabeth Naughton’s release party at RWA National 2010.  I remember I was in the process of rewriting my first novel to my editor’s requirements, it was due shortly after nationals and I was…nervous.  Christy was so encouraging, so positive.  And it only took a few words of reassurance from her to make me feel like I’d make it.  And I did–met the deadline with a very polished new version of the novel.

I’m very grateful for Christy’s words of wisdom that carried me through and always look forward to her fun and upbeat comments online.

Christy is a NYT bestseller of romantic suspense.  And you can win an autographed copy of the first book in her bestselling series here today! 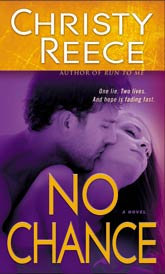 Up For Win Today:
NO CHANCE, first in her bestselling romantic suspense series

Book Summary:
Skylar James told a lie to the man she married, and eight years later she still bitterly regrets the deception. Unknown to Skylar, her husband, Gabe Maddox, now lives in the dangerous shadows of elite operatives who rescue victims. When Skylar tries to save a naïve young beauty, kidnappers come after her. For Gabe, Skylar had been his last shot at trust and love. But news of her disappearance battens down his anger and launches him into action. Saving Skylar is Gabe’s only chance for peace and his last chance for happiness.