>Where Do Characters Come From? + Giveaway!

>I’m thrilled to have a very special virtual author friend here today!  Many of you already know Elisabeth Spann Craig as the fab author who scours thousands of websites and blogs and tweets the plethora of amazing writing-related links she finds to quality articles. If you don’t already follow Elizabeth on Twitter, you are missing out on a major cache of information! (@elizabethcraig).

Yesterday, Elizabeth released the third book in her Memphis Barbeque mystery series for Penguin/Berkley w/a Riley Adams.  If you haven’t read one of Elizabeth’s books, I recommend you pick one up.  She is a fabulous writer with fun storylines, twisting plots and quirky, real characters.

She’s talking about where those characters come from today and we’re giving away 3 copies of Elizabeth’s new release HICKORY SMOKED HOMICIDE and 5 custom handmade bookmarks!  Just leave a comment to enter. 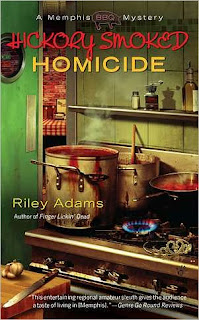 BBQ-joint owner Lulu Taylor knows pretty much everyone in Memphis who lives ribs. But one person she’d rather not know is Tristan Pembroke, a snooty pageant couch with a mean streak. When she finds Tristan’s dead body stuffed in a closet at a party, the police are suspicious- especially since Lulu’s developed a taste for being in the wrong place at the wrong time. Caught in a situation stickier than molasses, Lulu must clear her name, or risk getting fried…

Where Characters Come From by Elizabeth Span Craig

Writers are frequently asked, “Where do your ideas come from?”

I think most writers have a stock answer to this question. We’ll claim brainstorming or muses, or just random inspiration out of the blue.

Those are all true. But sometimes, ideas come after us. And frequently, they’re in the form of characters. We can actually build a whole book around a great character. For me, and I’m sure it’s the same for many writers, characters are sometimes inspired in unusual ways:

There are tons of characters around us every day. Sometimes I’ll actively go looking for interesting people. Fairgrounds and amusement parks and malls are great for this purpose. It’s amazing how many different types of people you’ll see. Stiff and grim, young and bubbly, odd and self-conscious. 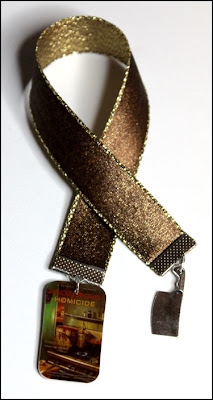 Sometimes these people will even come up and talk to me. Even if I’m not looking for characters, I’ll frequently have strangers come over to tell me the most remarkable things at the grocery store, drugstore, or post office. I think writers are magnets for these folks somehow—and they don’t even realize that’s what we are. The cool thing is that writers can take bits of one person (maybe their appearance) and bits of another person (their unusual gestures or diction or humor) and create a character that’s an amalgam of the two.

Sometimes characters appear at the least expected times. There was another mother at my son’s soccer game once. She was scheduling me on the team snack calendar. I was smiling and nodding, but I didn’t hear a word she said because I was thinking how perfect she’d be as a character in the book I was writing. Even better that I didn’t know anything about her and that she was a stranger—in this case, it was her appearance that was so great. She was perfect for a particular bit part. But I missed my date to bring snacks and had to leave the game to grab some when my week came up. 🙂

Characters who create themselves:

Then, sometimes, you have characters who are too big for their britches. They hop into your head with confidence and they’re not like anyone you’ve ever met. Although they’re supposed to have a bit part in your book, they aren’t content with the role. Next thing you know, they’re taking over your book! They’re scene stealers—they have the best punch lines and shine in the spotlight. These are characters who don’t know their place…you really have to watch them. It’s how my supporting character Cherry ended up with a sidekick role in the Memphis Barbeque series.

Friends who give us insight into our characters:

Sometimes, the opposite problem happens—you have characters who really don’t know their role in your book. They listlessly bumble through their lines and you’re wondering what on earth they’re doing in your story at all. You’re just about to fire them for poor performance when there’s a breakthrough. I wasn’t really getting a handle on one of my beauty pageant characters for my new book, Hickory Smoked Homicide. Beauty pageants can be a big deal in the South, but they were something that I wasn’t personally involved with and was always happening on the periphery of where I was—maybe there was a Miss Anderson waving from a car in a Christmas parade I was watching, etc., but that was about the extent of my involvement. I was aiming for a spoofy, fun look at the pageant world, but I kept hitting a wall.

I was a third of the way through the book and about to scrap the whole concept and start over when I picked up my daughter from a playdate. The mom there asked me politely how my book was going. I’d been struggling with it the whole time my daughter was playing at her house, so I admitted, “You know, I’ve got a big problem with the book.” I told her my concept and the trouble I was having with this character. She said, “Come on inside and have a cup of coffee with me. I’ll give you the dirt on the pageant world.” And she did! There was plenty of motivation for murder there, she assured me. And she gave me a fascinating perspective from someone who’d been involved in small-town pageants.

What we’re all looking for, both readers and writers, is a good character—someone to love, someone to root for, someone to hate. And inspiration comes in unusual ways, sometimes.

Who are some of your favorite characters? Did they come to life for you? Comment to enter to win 1 of 3 copies of Elizabeth’s new release HICKORY SMOKED HOMICIDE or 1 of 5 custom handmade bookmarks!
Books (US Shipping)
Bookmarks (International shipping)
**MUST** provide contact email to WIN!

Elizabeth’s latest book Hickory Smoked Homicide released November 1. Elizabeth writes the Memphis Barbeque series for Penguin/Berkley (as Riley Adams), the Southern Quilting mysteries (2012) for Penguin/NAL, and the Myrtle Clover series for Midnight Ink. She blogs daily at Mystery Writing is Murder, which was named by Writer’s Digest as one of the 101 Best Websites for Writers for 2010 and 2011.