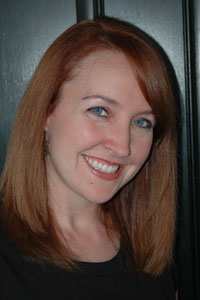 Sometimes you meet people and automatically click.  It was was like that for me with Kendra.  She is so personable and warm I felt like I’d known her for far longer than a few emails.  I think you’ll feel that way about her after reading through the interview below, and I hope you all enjoy her as much as I have!

I am a professed vampire novice, though you can’t be a living, breathing author of any genre without catching news of the hottest paranormal creature alive…or not.  So when I read my ARC of DARK AWAKENING I was immediately taken with the many and varied twists Kendra put into the storyline.

Here’s a desription of DARK AWAKENING: 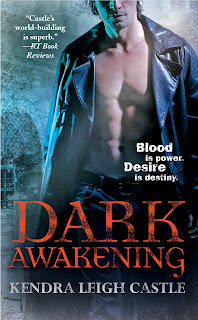 Tynan MacGillivray has spent the better part of his three hundred years serving at the pleasure of the queen of the Ptolemy dynasty, her prized hunter in a world where blood is destiny. But the lowblood cat-shifter gets far more than he bargained for when his new target, a human woman whose rare abilities make her the only hope for saving the greatest of the vampire dynasties, turns out to be far more than she seems.

Lily Quinn is an innocent whose beauty hides secrets that could change the world of night forever…and Ty will have to choose between the loyalty that has kept him alive, or a love that promises more than he ever imagined…if it doesn’t destroy them both.

So many aspects of this novel fascinated me: the way Kendra infused the Celtic Highlander history into a modern vampire hierarchy; the complication of social classes within this society and the internal and external conflict it brings to the characters; the constant spark between the hero and heroine from their first intense meeting; her superb worldbuilding.  Far too many elements of fine storybuilding to outline here.  I hope you’ll purchase this novel and enjoy all its intricacies personally.

Kendra, congratulations on finalling RITA! You attended the RWA National convention in NYC last month. Can you tell us what was different about attending the conference as a RITA finalist?

Thanks so much for having me over today, Joan! It was such a huge honor. And attending the conference as a finalist was amazing. This past year has seen a lot of wonderful forward movement in my career…a lot of things seemed to happen at once, and getting the RITA final for that particular book was really the icing on the cake. It’s so incredibly validating to be singled out by your peers as someone who is capable of writing something really special. The whole thing was magic.

I find paranormal world building one of the hardest elements to establish in a concrete, believable, seamless way in writing. How do you do it?

I love that world-building quote from RT. It’s a huge compliment, particularly because having your characters interact in and with a world quite different from the everyday isn’t the easiest thing, at least not if you want to do it well. No one wants to get pulled out of the story and see the woman behind the curtain pulling the levers. Preventing that is always at the back of my mind!

I don’t pull everything together all at once. I’m a pantser at heart, despite the fact that I now have to write outlines for my editors (*sniffle*). So I normally start with a more nebulous framework for the world that gets added onto over time. In the case of the Dark Dynasties, I knew I wanted a caste system, a dark world ruled by disaffected nobles and populated by a vast underclass either serving or trying to avoid them. The idea of the bloodline marks came early, and in fact the first character I really “knew” was Queen Arsinöe.

I, um, had thought she might be a bit nicer when I started. That happens sometimes. Anyway, that loose idea of the world I was operating in, and the relationship between the Ptolemy dynasty and their “pets”, the Cait Sith, got the ball rolling. And as Lily and Ty made their way through the story, the details got filled in. Someone once called my process “organic”, which is a really nice way of saying “fumbling around in the dark”, but it works for me. And frankly, I have a lot of fun discovering things at the same time as my characters!

I love the way you’ve given these paranormal characters such human quirks—Lily, the heroine, and her hopeless sense of direction, and Ty, the hero, his love for late night television and movies. These elements add depth and dimension to your characters.

Can you tell us more about your thought process behind those quirks? Are they characteristics of yours or someone close to you? What other quirky elements have you added to other characters in the past that have added dimension? How do you choose quirks for your characters?

Thanks! I don’t really pick and choose quirks for my characters. It’s more like they turn up with them and I just have to put them in the right situation to discover them. With Lily, some of her terrible sense of direction was born of necessity (she wouldn’t have met Ty if she’d gone the right way!), and some is just…her. Well, and me. I couldn’t find my way out of a wet paper bag, even with a map and a flashlight. Sharing that particular quirk with her was an early way of relating to the character, since she’s quite different from me in other ways.

Ty’s love of late night television and his knowledge of pop culture was one of those things that just clicked into place. The guy is up all night, every night. Often, he isn’t doing much. What’s a bored vampire to do in the wee hours? Jaden, his friend, likes to cook. That was one that just sort of happened, and I got mushy over it. “Aww, a vampire who likes to make comfort food!” Weird, maybe, but revealing of his personality. I love things that humanize the dark and dangerous heroes.

In addition to having a heated sexual chemistry, your hero and heroine seem to spark in every interaction. What is your philosophy on creating characters whose interactions light up the page and keep the reader invested?

It’s a delicate dance, and I always know if it’s not working. Imaginary characters can be surprisingly stubborn to work with! I think for me, I try to hit a balance between the hero and heroine having enough in common to relate, but enough differences to intrigue and infuriate one another. I know dialogue is key for me…I love to have them talk, and dialogue is one of my favorite things to write. Between the verbal sparring (which all of my hero/heroine combinations do) and dealing with a magnetic sexual pull between them strong enough that even getting close sets off fireworks, I always hope readers will pick up on and enjoy all of that sexual tension. I’m glad you think I’m managing it!

You are married to a Navy fighter pilot—an undeniably heroic career. What has prompted you to write about vampires, werewolves and magic instead of something more Suzanne Brockmann-like where you’d have your own expert in-house?

(As an aside, I ask this question because I’m married to a career firefighter and for a very long time wrote about cops and FBI agents. My critique partner kept asking me, why don’t you write about firefighters? My first sales were of heroes as ex-firefighters. So I thought I’d pass the question along.)

It was amazing to watch Brian when he was flying (he developed some serious back problems around the ten-year mark, and after a couple of surgeries has moved into defense acquisitions). There were things I got a kick out of (flight suits!) and we had a wonderful, tightly-knit community I enjoyed.

But you know, it’s really funny…living with the Navy day in and day out has made it far less appealing to write about. Not that it’s bad, but I write to create a fun escape, and being a Navy spouse is my everyday reality. Apart from that, I’ve always been drawn to stories with a magical and/or supernatural element. I’ve never been much interested in writing tales without it! And by the way, thanks to you and your husband for pursuing (and supporting) such a challenging and heroic career.

As the wife of a military man, you’ve moved around a lot. How do you think that has affected your writing?

I don’t know if or when I would have started writing seriously without the Navy! I was very good at finding excuses not to buckle down. And with having babies early on in our marriage, the excuses were pretty valid. But then we got stationed in the Nevada desert, which was like being sent to the moon for this New Englander, and I knew it was put up or shut up time. If I couldn’t write a book in a place with…we’ll be nice and say “few distractions”…it wasn’t going to happen. As far as the further moving affecting my writing, I think it’s helped me set things in different locations. I’ve seen a lot of places!

You have three children and your husband must be gone quite a bit with his career. How do you manage your writing and promotion schedule?

“When do you find time to do this?” is the number one question I get from pretty much everyone I know! Actually, my husband is around most of the time now that he drives a desk instead of a jet, and that has helped immensely. Still, he’s at work all day, and I play chauffeur to the kids (11, 9, and 5, respectively). We have three dogs and a cat. Life is wonderfully (sometimes insanely) full. So I write when the house is quiet, which means staying up late. Sometimes, as a deadline approaches, very late! But I expect that when the youngest heads off to kindergarten in the fall, I’ll find myself with something that could be a regular work day…and not that I’m anxious to see my baby go, but being able to get all that writing time in when I’m at my most awake sounds awfully nice.

Thank you so much for having me, Joan! Those bookmarks are gorgeous, and I also have a signed copy of DARK AWAKENING to give away to one lucky commenter! I’ll be here all day to chat, so if you’ve got questions about the writing process, my books, or paranormal romance in general, fire away!

Kendra Leigh Castle writes dark paranormal romance and lives in Southern Maryland with her husband, three children, and menagerie of pets. You can find her online at www.kendraleighcastle.com, on Twitter as @KendraLCastle, and on facebook. 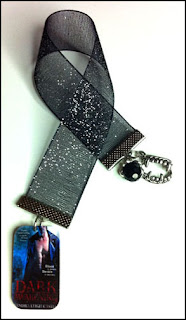 Comment on Kendra’s interview or ask a question of your own and you’ll be entered to win one of the following 7 prizes: (U.S. & Canada Shipping Only)
* MUST leave a contact email *
Posted in authors, dark awakening, fiction, giveaway, Joan Swan, kendra leigh castle, paranormal, RITA finalist, romance, RWA, vampire