>I first learned of Lauren Dane through my critique partner, Elisabeth Naughton.  I have followed and chatted with Lauren on Twitter and will participate on a workshop panel with Lauren and several other authors at the RWA Conference in New York 2011 (if RWA approves the proposal, that is).

Lauren is one of the most prolific authors I’ve ever met.  Her work is quality entertainment.  Her covers frame-worthy!  So don’t miss your chance to miss this one! 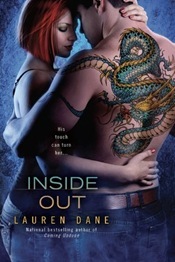 Book Summary:
Ella Tipton is a survivor. In the wake of an attack that left her nearly dead, she’s spent each day putting her life back together. Once vibrant and outgoing, she’s needed to reclaim the best parts of who she was while retaining the hard won lessons. There hasn’t been room for any romantic entanglements, even if she were ready. Still, it didn’t mean she had to stop sneaking looks at Mister Tall, Dark and Tattooed himself.

Security professional Andrew Copeland isn’t quite sure when his jones for the lovely and decidedly skittish Ella developed. He’s known her for years, has watched her triumph over the pain she’d been dealt. Cope is no stranger to women, but he knows the nervous flush he gets every time he talks to her is different than any attraction he’s had in the past. Determined to get Ella to let him in, Andy does the one thing he can think of to get close: he offers her hands-on training in self-defense.

While Ella’s sure he’s just being nice, the prospect of being able to touch him and gain the tools to push away the last vestiges of her fear is more than she can resist. Soon enough, Cope shows Ella his feelings are far more than friendly and re-ignites something deep inside her. Before long desire and love turn them both inside out.

Works In Progress:
This woman makes me dizzy!!!