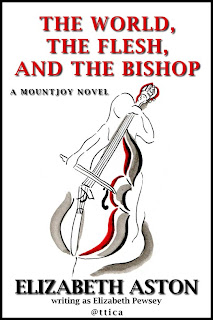 My guest today is Elizabeth Aston, born in Chile to an impeccably English father and a distinctly un-English Argentine mother. Educated by Benedictine nuns in Calcutta, Fabians in London, and Inklings at Oxford, she has lived in India, England, Malta and Italy. Her Mountjoy books (originally published by Hodder) were inspired by years of living in York, where her son was a chorister at the Minster, and depict the unholy, unquiet, and frequently unseemly goings-on of an imaginary northern cathedral city and its peculiar inhabitants.

Her other books include the bestselling Darcy series – six historical romantic comedies set in the world of Jane Austen, and a contemporary novel, Writing Jane Austen. These were inspired by her love of Jane Austen – her heroes, her heroines and her wicked sense of humour.

Elizabeth Aston on Writing a Series:

What is it about a series that draws the crowds? Familiar characters? A familiar world? Stories that have a life beyond the last page?

The most usual series novels are found in the world of crime, where the same cop/PI/detective returns, book after book, to solve new crimes. We get to know the sleuths, with all their faults and fancies, vices and virtues, and we are happy to be able to spend more time with them and their circle than we would ever get in a single volume.

I’m not a crime writer, so my books are different. I’ve written two series: the first the Mountjoy sequence of romantic comedies, set a while ago in an imaginary city and county in the north of England. The other series of novels are six historicals set in a post Jane-Austen world, beginning with Mr Darcy’s Daughters, which are about the imaginary family that Darcy and Elizabeth have some two decades after their marriage at the end of Pride and Prejudice.

Neither of these series started out as such. The Mountjoys began with a single book, Children of Chance, now published as a prequel, and then, having created that imaginary world, I and my agent and publisher all wanted more of it. So I wrote a new book, with a new heroine and a new happy ending, but grounded the story once more in the city of Eyot (loosely based on York), and the surrounding countryside. Favourite characters from the first story came back: the cellist, Sylvester Tate; his witchy, second-sighted housekeeper, Lily; the wicked, amoral and fascinating Valdemar Mountjoy and his troubled son, Thomas.

Two more books were asked for, and by now I had quite a cast to draw on, who could return and feature in the new novel so readers can pick up on what happened to them after the end of their stories. It was the same with the Darcy series: one story led to another, each self-contained, but each enriched with characters and references to people and events in the other books.

For a writer, a series can be both a benefit and a restriction. Once you have your setting, once you’ve built your world, that’s what you write about. You can take your characters out of the main location, as I do in Volcanic Airs, where the Mountjoys and their friends and relations all decamp to an idyllic island of Sicily, but even so, part of the story still takes place in Eyot, and that’s where the roots of the novel are firmly planted. And the characters can – and should – grow and develop, but you have to work with what’s already happened to them. There’s no going back and inventing a different back-story for them.

How long should a series be? Both of mine came in at six books, and for me, that was enough. I felt it left both readers and author, satisfied but not sated, and, like a good guest, one shouldn’t overstay one’s welcome.

Might I return to either world, the delicious and intriguing city of Eyot or the fascinating and dashing world of London in the early nineteenth century?

Maybe. The characters and settings are alive for me as they always were, and questions come into my head, I wonder what happened to…? Maybe a novella or two, just to keep in touch, say hello, see how they’re all getting on.

As with all good friends, one never wants to lose touch.

What do you love about a series? What is your favorite series?

Comment for a chance to win 2 prizes:
1) A copy of Children of Chance, the prequel of the Mountjoy series.
Elizabeth will pick a winner of this ebook next week!
2) All commenters will be entered for the Grand Prize: a lovely hematite bracelet and earrings. Elizabeth will pick a lucky winner mid-October.
International
MUST leave contact email to WIN
Posted in author interview, elizabeth aston, giveaway, historical fiction, Joan Swan, writing a series