>THE WEDDING AFFAIR is Leigh Michaels’ new release as well as the first of her historical romances that I’ve read. I received the book from Soucebooks for review and so thrilled I did–as I’ve found another fantastic historical romance writer to follow!

The Duke of Somervale’s sister is getting married in the wedding of year — but the wedding guests are in the mood for affairs, not vows!

The Duke needs the help of beautiful, stubborn Olivia Reyne to fight off the debutantes who have taken over his country estate. Olivia’s willing to help — at a price which will secure the future for her small daughter.

Penny Townsend sees the wedding as her last chance to salvage her arranged marriage and turn it into something more than a matter of convenience.

And vicar’s daughter Kate Blakely needs a job — and fast — before she gives in to the tempting presence of her first love!

MY REVIEW:  This novel was such a treat to read. One of the elements I loved most was its three storylines. Yes — three. Three heroes, three heroines, three stories. Each woven into the same setting, timeframe and plot so that they weave efforlessly together. I felt as if I was watching a movie rather than reading a book. Leigh’s ability to juggle three romances so fluidly turns me a tad green, as I find adding a secondary romance challanging while all three of her romances stand alone and carry equal uniqueness and weight without overshadowing the others.

The technique made the the novel fly by because there are of course three times the troubles, three times the conflicts, three times the risk and of course three times the romance *blush*.  (Tip: When you read this, make sure you’ve got a Big Gulp of ice water nearby.)  Just as one couple reaches a conflict pinacle, Leigh switches to another couple, another situation, equally as troublesome, equally as intriguing, and all the time in the back of my mind I’m wondering…but what about the others? What’s going to happen with them? The result was an eveloping page-turning read where I found myself both enthralled with the characters I was reading about, yet dying to know what happened with the others.

I enjoyed Leigh’s humor, unique with each character or set of characters true to their relationships and situations, as well as her effortless and rich character development.

THE WEDDING AFFAIR was a fun, intruiging, fast read and I’ll be watching for Leigh’s future books!

LEIGH’S INTERVIEW:
Tell us about your upcoming release.

In The Wedding Affair, the Duke of Somervale’s sister is getting married, but the guests who have gathered for a house party leading up to the wedding are much more interested in their private affairs – and I do mean affairs! – than in the bride and groom. 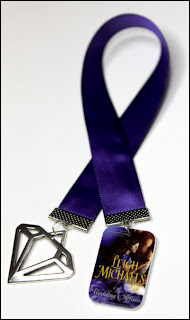 Like my previous two historicals, Just One Season in London and The Mistress’ House, this is a triple story – three heroes, three heroines, and three romances which are woven together into one book. I love writing triple stories because there’s so much action that even I never quite know what’s going to happen next.

Tell us something unusual about this book (i.e. in its creation, execution, production).

The archery scene which appears in the last fourth of the story was at the beginning of chapter two in the first draft. That’s what’s called a heavy revision.

I’m sure I do, but I’m still looking for them.

Very dark chocolate chips, melting slowly on the tongue, one by one…

Introvert pretending to be an extrovert.

Are You A Window Person Or An Aisle Person?

Ever Hit A Jackpot On A Slot Machine?

No, but I have hit the jackpot in a couple of other areas, like (1) selling my first book despite the worst synopsis and sample chapters in the history of the world, and (2) being asked to flat-sit one summer in London, about a mile from Buckingham Palace.

Are You Afraid Of Heights?

Only if I’m looking down!

How many pillows do you like to sleep with?

Just one. The other two are to prop me up so I can read in bed.

Of course; doesn’t everyone? (Please don’t tell me Wesley’s a mythical character like Santa – it would break my heart!)

Snowy, because I can sit in the bay window in my living room and feel as though I’m in a silent snow globe. Also, because of my childhood in an isolated rural area, snow days are always kick-back-and-read days – even though, with my office in my house, I really have no excuse not to work no matter what the weather.

Ask Leigh a question or leave a comment to enter for 1 of today’s 2 prizes:
1) An ARC of THE WEDDING AFFAIR and matching bookmark
2) 1 of 5 handmade custom bookmarks
International
**MUST** leave a contact email to WIN

BIO:  Leigh Michaels is the author of nearly 100 books, including 80 contemporary novels, three historical romance novels, and more than a dozen non-fiction books. More than 35 million copies of her romance novels have been published. Six of her books have been finalists for Best Traditional Romance novel in the RITA contest sponsored by Romance Writers of America and she has received two Reviewer’s Choice awards from Romantic Times.

Leigh is the author of non-fiction books such as WRITING THE ROMANCE NOVEL, a step-by-step workbook, and CREATING ROMANTIC CHARACTERS and she teaches romance writing on the Internet at Gotham Writers–Workshop, www.writingclasses.com.