And Cynthia is also giving away a copy of the book! Whoo-hoo! Open Internationally! 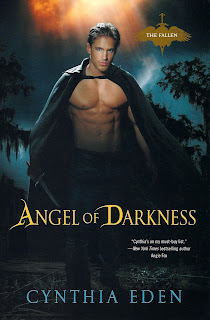 As an angel of death, Keenan’s job is to collect the souls on his list. He’s carried out his duty for two thousand years and never faltered once. Until he meets Nicole St. James. When the moment of death comes, Keenan hesitates, and instead of taking Nicole, Keenan touches the vampire who’s attacking her.


Cast out of heaven for disobedience, Keenan plummets to earth. Six months later, he finally manages to track Nicole to a bar in Mexico. He’s stunned to discover that the woman he remembers has undergone a dramatic change—she’s become a vampire. And when he realizes that she’s the target of all manner of enemies—other vampires, demons, even shifters—he’ll do whatever it takes to protect her, even if all hell breaks loose…

Cynthia, tell us about your upcoming release.
ANGEL OF DARKNESS tells the story of an angel who falls for a vampire. Literally. Poor guy—he doesn’t know what’s happened until it’s too late…angels don’t handle lust—or love—very well.
What’s your favorite thing about the book featured here today?

My hero is a virgin. Yes, that’s my favorite thing. I’d been wanting to write a virgin hero for a long time now—and here he is! In my “world” angels don’t feel emotions or human needs until they fall, so my angel knows nothing about lust. Lucky for him, my heroine is happy to teach him a few things.
What creates the biggest conflict between your hero and heroine?

Ah…well, my hero, Keenan, is an Angel of Death, so that means his job is to take souls from this realm to the next. At the beginning of my book, Keenan is supposed to take my heroine’ soul (i.e., kill her), but he doesn’t. He can’t. So he falls because he was tempted, and he didn’t carry out his duty. If Keenan wants to get his wings back—and earn his way back to heaven—he has to complete his original mission. He has to kill my heroine. That’s their big conflict.

Why did you put these two together?
I like to work with opposites when I write. My hero (an angel) and my heroine ( a vampire)—they’re definitely opposites. On all kinds of levels.

What is your strategy in creating villains?
I like to create a villain who is…good. Wait, let me clarify. He’s bad, of course, he is, but can’t bad people also have good parts? No one is 100% evil, just as no one is 100% good. So when I crafted my villain, I wanted to show that there could be some redeeming qualities in him. Those qualities just might be buried very, very deep. And who knows? Sometimes, villains can later turn into great heroes.

What do you love most about this book/series?
These books are set in New Orleans, and I was able to incorporate a lot of real locations in my story. I’m a frequent visitor to New Orleans (maybe too frequent?), and it was so much fun to put some of my favorite spots in the stories. I actually went back to New Orleans recently, and I filmed from those locations. I’m making videos so readers will be able to “see” those spots, too.

Is there a message in this novel that you want readers to grasp?
Yes, redemption can be possible, for anyone. No matter what we do or what happens to us, hope will always exist.

Thank you so much for taking the time to interview me!! It’s been a pleasure!

Cynthia is also giving away a copy of ANGEL OF DARKNESS to one lucky winner!!
Enter below — Open Internationally!

Cynthia Eden is a national best-selling author of paranormal romance and romantic suspense novels. Her books have received starred reviews from Publishers Weekly, and her novel, DEADLY FEAR, was named a RITA® finalist for best romantic suspense.