>Review of A TOUCH OF CRIMSON, Sylvia Day Interview + Giveaway!!

>I’m excited to have Sylvia Day here today! The first book I ever read of Sylvia’s was Pride and Pleasure, her February historical romance release. I was beyond entertained; I was impressed. So much so that I wrote a detailed review of Pride and Pleasure on Savvy Authors. As many of you know, I’m a lover of craft, and was thrilled to find not only how much stellar craft Sylvia utilizes in her writing, but how she manipulates those elements to take her storytelling to the highest level.

I was excited (though not surprised) to find that same level of mastery in A TOUCH OF CRIMSON. Really fabulous books are always more difficult to review, not unlike they are to write. All the elements intertwine and play off each other to weave an intricate tapestry of plot and subplot, emotion and intellect, character and setting. I toyed with the idea of making this a two-part review, but decided to spare you my blathering and hit the high points of what I loved most about A TOUCH OF CRIMSON.

Comment or ask Sylvia a question to enter to win:
1) A copy of A TOUCH OF CRIMSON
2) 1 of 5 custom handmade bookmarks 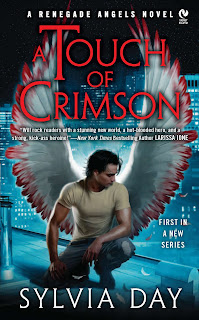 A TOUCH OF CRIMSONAn angel with immense power and insatiable desire, Adrian Mitchell leads an elite Special Ops unit of the seraphim. His task is to punish the Fallen–angels who have become vampires–and command a restless pack of indentured lycans.

But Adrian has suffered his own punishment for becoming involved with mortals–losing the woman he loves again and again. Now, after nearly two hundred years, he has found her: Shadoe, her soul once more inhabiting a new body that doesn’t remember him. This time he won’t let her go.

With no memory of her past as Shadoe, Lindsay Gibson knows only that she can’t help being fiercely attracted to the smoldering, seductive male who crosses her path. Swept into a dangerous world of tumultuous passion and preternatural conflict, Lindsay is soon caught between her angel lover, her vampire father, and a full-blown lycan revolt. There’s more at stake than her love and her life–she could lose her very soul…

My Review:
A TOUCH OF CRIMSON begins with action and intensity–my favorite way to get things going. Immediately, I recognized the depth and number of characters. As this is the first book in a paranormal series, the ground work must be laid. This is often a difficult task, and in the hands of a lesser writer, would surely confuse, if not lose, readers. But Sylvia creates a world filled with various species, the Sentinels, the Lycan and the Fallen, and rules governing those species’, yet never makes the complex complicated.

This also shows how Sylvia trusts her readers, how she respects their ability to follow her threads, pick up her clues, utilize their intelligence to soak up all the information she’s offering. I respect an author who believes her readers are sophisticated and intelligent and writes to that audience.

With her lyrical prose and fresh description, Sylvia guides the reader expertly through each group’s description, culture, powers and conflicts. She deftly illustrates how each species is both at odds with and in need of the others, outlining a tight web of conflict, all while moving the story forward with action and spicy dialogue.

When you look below at Sylvia’s answer to the question on creating villains, you may understand why I found the villains in A TOUCH OF CRIMSON so gripping. They felt more developed to me than most villains. A familial-type group much like the Sentinals or the Lycans, the Fallen have suffered immensely – the head of the family, a fallen angel, has lost his wings at the hands of Adrian, who himself says it was wrong to take them. And Syre’s son, Torque, who losses his wife at the beginning of the story, again at Adrian’s hands. Their loss and suffering make them sympathetic villains – my favorite kind.

The heroine in A TOUCH OF CRIMSON, Lindsey, is as wounded as the rest of the crew, though you’d never know it with her kick ass attitude. She never backs down, but is driven to hunt by memories of her beloved mother slain by vamps when she was a child. There is something deep inside that tells her she has an obligation to utilize her given abilities to right this tragic wrong, all of which made her very empathetic.

Adrian, the hero, is suffering penance for his history of wrong-doings by losing the love of his life–Shadoe in Lindsey’s body with no memory of Adrian–over and over again. He is fighting her father, the villain, for her love, an age-old conflict that tugs at heartstrings. Each man believes he’s doing the right thing for her, each says he is doing it out of supreme love for her, yet each hold their own private agenda – it’s like a train wreck from which you can’t look away, hoping to see survivors emerge from the wreckage.

The complexity of species and cultures crossing in this novel makes for many unexpected twists and turns during the course of the story. And while the questions for A TOUCH OF CRIMSON are answered within this book, many others remain, dragging the reader’s interest to future books. Numerous well defined secondary characters and intriguing story lines make this first of the series rich in its own right, while priming the reader for the series as a whole, because after reading A TOUCH OF CRIMSON, you won’t be able to stay away from the remainder of the trilogy.

Sylvia’s Interview:
What sparked the idea for this book/series?
Really, the idea was sparked by a combination of an editor and my existing Marked series. The editor sent a note to my agent saying that if I wrote a paranormal romance series with alpha heroes, she wanted to see it. My Marked series is where I’d introduced my Dominion world, which encompasses the entire hierarchy of angels. The Marked series focused on the lowest sphere and I always knew I was going to explore the other spheres and ranks at some point. The editor’s prodding had me thinking along paranormal romance lines and the story of the Watcher angels struck me. Angels who fell from the heavens for lust and love. How could I not write about that? It’s just too awesome. In the end, the editor who prodded me forward with the idea isn’t the editor who won the auction for the series, but I’m grateful to her all the same and always will be. The idea was there in my mind, but she gave me the impetus to get it down on paper now rather than later.

What is your strategy in creating villains?
I’m not sure I have a strategy, but I try to see my villains as complete characters, like my H/h. Unless they’re mental defectives, they’ll have facets of their character that aren’t horrible. They’ll have things they care about, things they’ll fight for. They can cry and feel pain, they have dreams and disappointments. Ideally, I like to understand their motivation—maybe even relate to it—even if their means doesn’t at all justify the end they’re going for.

Tell us something unusual about the creation/execution of this book:
The Renegade Angels series is a trilogy. Now, a trilogy can either be a set of three individual works that are connected by characters and/or theme, or it can be a single work divided into three parts. The latter is what the Renegade Angels series is–one story, divided over three books. That’s been a rocky road to travel, because I have to answer some questions in each book, but not all. Each book features a different couple and their romance, with each couple picking up the baton from the couple before as they all race to the finish. I have to set up each book so that a reader could pick up #2 or #3 and get the gist, but since it took an entire book to tell Act #1 and Act #2, I don’t have the room to rehash what’s already happened in detail. And all three heroes are also antagonists, which means there are shades of heroism and villainy in each one.

What do you love most about this book/series?
The characters are so many shades of gray. They surprise me all the time. And it’s a challenge to write. I’ve never tackled anything with this type of construction before.

Are You A Window Person Or An Aisle Person?
Aisle. I don’t like having to ask someone to get out of my way, because then I’m dependent upon them to be polite and do so. Plus I don’t care what’s out the window; my nose is in a book and I’m not looking anyway.

Are You Afraid Of Heights?
Yes, I am. *shudder*

Comment or ask Sylvia a question to enter to win:
1) A copy of A TOUCH OF CRIMSON
2) 1 of 5 custom handmade bookmarks
International
**MUST** leave a contact email to WIN 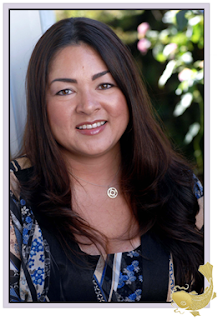 Sylvia is a lifelong California resident who loves to travel. Her adventures have taken her to Japan, Holland, Germany, France, Mexico, Jamaica, and all over the United States. Born in Los Angeles, she grew up in Orange County (the O.C.), and later lived in Monterey, Oceanside, and the Temecula Valley.

She is a Japanese-American who enjoys the many Japanese cultural events in Southern California as well as frequent family jaunts to Disneyland, Knott’s Berry Farm, and Sea World. Her childhood career aspirations were few — become a dolphin trainer at Sea World or a bestselling novelist. Obviously, the dolphin trainer career took a back seat.